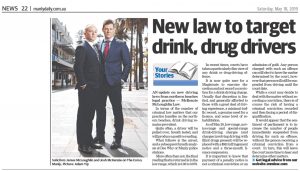 “In terms of the number of criminal law matters that our practice handles on the northern beaches, drink driving remains prevalent.

Quite often, a driver will be pulled over, breath tested, and will produce a positive reading.

What follows is the arrest and a subsequent breath analysis at Dee Why or Manly Police stations.

In recent times, courts have taken a particularly dim view of any drink or drug driving offence.

It is now quite rare for a Magistrate to exercise discretion and not record a conviction for a drink driving charge.

Usually, that discretion is limited and generally afforded to those with a great deal of driving experience, a minimal traffic record, a genuine need for a licence, and some level of rehabilitation.

As of May 20, low-range, novice range and special range drink driving charges (and charges involving driving with illicit drugs present) will be replaced with a $561 infringement notice and a 3-month licence suspension.

It is important to know that payment of a penalty notice is not a criminal conviction or an admission of guilt.

Any person charged with such an offence can still elect to have the matter determined by the court, however that person will still be suspended from driving until the court date.

While a court may decide to deal with the matter without recording a conviction, there is of course the risk of having a criminal conviction recorded and then facing a period of disqualification.

It would appear that the sentiment of Parliament is to increase the number of people immediately suspended from driving for such an offence, without the person receiving a criminal conviction from a court. In turn, this will leave the court more time to hear and determine other matters.”

The above article was published in the Manly Daily on 18 May 2019, their paper and articles can be accessed here: